About those prescription warnings... 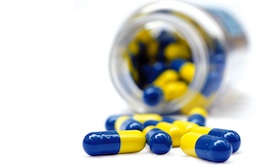 It's always interesting to see the response to that page and a half of warnings that goes with almost every prescription I write these days. The TV ads are also a little scary at the end when they warn about how these great drugs could actually harm you. It's obviously a good idea to be well informed, but there are some potential downsides.

We know without a doubt that these drugs have prevented countless heart attacks and strokes by reducing the amount of plaque build-up in our arteries. They can drop LDL (bad cholesterol) by up to 50% in some cases that I've seen in my own practice.

Kind of makes you wonder if these statins are even better than we thought. There are small percentage of patients who develop significant muscle pain and have to get off their statin, but I've found that quite uncommon. In addition, we need to be aware of possible drug interactions with other medications.

To be sure, we'd love for our patients to reduce their risk factors as much as possible by aggressive lifestyle changes (diet, exercise, smoking cessation, etc.) But if your cholesterol level is dangerously high, don't avoid taking your doctor's advice just because of those warnings.

Next time, read them closely, but if you have enough concerns that you are afraid to take the medicine, call your doctor first before tossing the prescription! Always try to get BOTH sides of the story. After all, driving to the doctor's office to get the prescription is probably more risky to your health than taking the drug!

And by the way, don't forget to take an aspirin a day...it's another miracle drug. Another recent study shows it reduces not only heart attacks, strokes and colon polyps, but also significantly reduces all cancer risks!

(But are you sure you'll read the page and a half of warnings about aspirin use?)

Above all, be smart about your health; study both your lifestyle and your meds.

Cancer is a word, not a sentence.