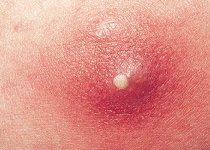 Those of us who have staffed ERs have heard this chief complaint from our patients many times. The patient commonly presents with a papule on the skin that is tender and red. As common as this complaint is its rarely due to a spider. Of the thousands of spider species that exist around the world only a few spider pose a threat to humans. Those spiders that do pose a risk are widow and false black widow spiders, recluse spiders, Australian funnel web spiders, and Phoneutria spiders. Good news though, the last two don’t exist in the United States.

Bites usually present as a solitary lesion they can be painful or painless, there can be death of the tissue due to envenomation (particularly with recluse spiders) or if the venom enters the bloodstream the effects can be widespread (systemic).

There’s a common expression, when you hear hoof beats look for horses rather than zebras. So as physicians we look for other reasons.

So here’s what I recommend. Next time you have a red, tender, swollen lesion that looks like it could be a bite visit with your doctor so he or she can review the symptoms and decide if a visit is needed. Most insect bites will only have a localized reaction that subsides in a few days. Staph infections will typically worsen an may need to be drained and treated with antibiotics. It never hurts to apply a topical antibiotic ointment to one of these lesions early on. Just remember that many people can have an allergic reaction to the neomycin in triple antibiotic so using polysporin is the better choice.

The “I” in illness is isolation, and the crucial letters in wellness are “We”